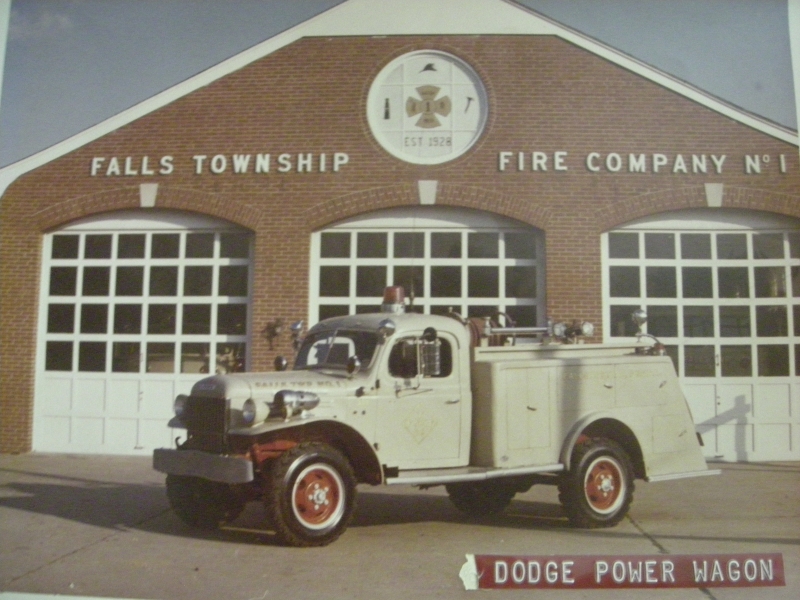 Falls Township Fire Company No.1 was formed by 60 “Subscribers” all who were residents of the Village of Fallsington. On the 15th of March 1928, the subscribers chose the 3 original Trustees. The three were Albert S. Hibbs, H. Clinton Healy, and David Satterthwaite. At the same time they petitioned the Commonwealth of Pennsylvania along with Court of Common Pleas of Bucks County for incorporation. On April 13, 1928 in Harrisburg, the Deputy Secretary of the Commonwealth, George D. Thorn, certified the name of “Falls Township Fire Co. No. 1”. shortly thereafter on May 14, 1928, the President Judge of Bucks County, Wm. C. Ryan, approved the petition, and granted a charter.

Prior to the formation of the fire company, anecdotal evidence suggest that the Falls Township Board of Supervisors contracted with the City of Trenton, New Jersey to provide Fire Protection to Falls Township.

The first firehouse was built on land donated by Charles Satterthwaite and built by Bert Hibbs for $500.00. This station was located at 82 Main Street in Fallsington. This location is now a private dwelling.

The first official meeting was held on Monday July 10, 1929 in the new fire house. It was called to order at 8:00 PM by acting President Charles Sattherwaite . George Duke, President of Capital View Fire Co, Morrisville, PA acted as advisor. The first order of business was to solicit names for membership. 15 names were proposed and accepted.

The following were the first members of the Falls Township Fire Co. No.1

Dues were membership was prescribed at $2.00 per year. It was also prescribed that all meetings of the fire company would be held on the first Monday of each month.

The first truck, a Brockway Chemical, was donated by Union Fire Co of Morrisville. In 1929, a Model A Ford Truck Chassis was purchased for approximately $500.00. The tanks and body from the donated Brockway were transferred to the new Ford.

The trucks served Falls Township until 1950.

In 1937 a new 350 gallon Diamond T Pumper with Ward LaFrance equipment was purchased and was in service for 30 years. The firehouse was paid off in 1937

The fire company added radios to its equipment in 1955. The old firehouse on Main St was sold to the Delaware Valley Rescue Squad in 1958 and on Feb 17, 1958 our present firehouse on Yardley Avenue was started and dedicated on September 19, 1959. Our Sub-Station on Makefield Road was dedicated on June 26, 1971

Our company has come in 50 years from a $500.00 firehouse and donated truck to a company with equipment and buildings worth near or over $500,000 We owe all this to the hard working members, Ladies Auxiliary, people of Falls Township and the help of our neighboring fire companies

No feed found with the ID 1. Go to the All Feeds page and select an ID from an existing feed.